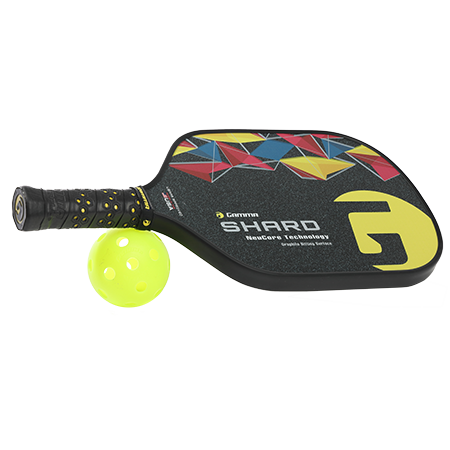 You know you've heard of pickleball somewhere. Maybe it was a game you played as a kid or something your grandpa does after a round of golf, and you're getting warm. Because pickleball is a game for all ages and it's also one of the fastest growing sports in the country -- with a whopping 650-percent bump in six years!

But what is pickleball exactly, you ask? Because now you're thinking this new athletic and fun-time sport is something you want to get in on.

To get you started, we've put together a quick pickleball paddles buying guide. Keep reading to learn how to choose the right pickleball paddles, basic rules, and what all the fuss is about. Then, grab some gear and head out to the court to give it a go!

Pickleball is a court sport similar to tennis and paddle tennis. It's the same in that you hit a ball back and forth over a net to win points. The court, however, is smaller than a tennis court -- the size of a badminton court.

The equipment and gear is also a bit different -- paddles and a plastic wiffle-ball-like ball. The rules and scoring are different as well.

Players enjoy singles or doubles but doubles is the most popular.

Pickleball is often played on tennis courts with different lines marked out but there are proper pickleball courts popping up across the country.

There is a national pickleball association called the USA Pickleball Association (USAPA) set up to "promote the development and growth of pickleball in the United States and its territories." The USAPA governs the sport -- the official rules, tournaments, rankings, and more.

A Brief History of Pickleball

Once upon a time, in 1965, there was a dog named Pickles that lived on Bainbridge Island just off Seattle in the Puget Sound. Pickles lived with a family that -- together with friends -- made up a fun paddle game with a wiffle ball to play on gorgeous summer afternoons.

Pickles loved that ball as much as the three guys that invented the game -- U.S. Congressman Joel Pritchard, William Bell, and Barney McCallum -- and would steal it and hide in the bushes.

Hence, the name pickleball and the start of a new sport. First, it was played in yards, driveways and cul-de-sacs. By the '70s, more people wanted in on the action, and it spread.

Today, pickleball is played in rec centers, parks, YMCAs, and P.E. classes, and high schoolers and college students are picking up on it too.

How to Play Pickleball

First, imagine a tennis court the size of a badminton court -- 44 feet long and 20 feet wide. Dividing the court in half is a net like a tennis net that's 36 inches high by the posts and 34 inches in the center.

Each side -- a player or team --is on one side of the net. Near the net is "the kitchen" -- or non-volley zone. It stretches from the net toward the back line seven feet.

From the back line where you stand to the kitchen is 15 feet of court. That part is divided in half into two rectangles.

To begin play, the server stands behind the right "service square" -- the right rectangle -- and serves diagonally to the opponent's right service-receiving square. The ball must clear the net and bounce in the square for the serve to be good.

The opponent then hits it back. It must then bounce once on your side before hitting it back.

A rally then ensues until one team hits a winner in the lines that can't be touched or the other team hits the ball in the net or out. The team that didn't miss their next shot wins the rally, but you only score a point if you're serving.

Once in play, players can only volley the ball back once it has bounced once on their side. A volley is when you hit the ball back in the air before it bounces on the court.

You are not allowed to volley from inside the kitchen area by the net. This keeps players from just hovering over the net and smashing it back down.

The server keeps serving until she or he faults. A fault is when you don't make the serve in. But the server switches sides between right and left service square with each serve, meaning if you serve from behind the right square in your court the first time, you move to the left square.

Serving alternates sides throughout the game.

The server must have both feet behind the back line when serving. The serve must be an underhand stroke with the paddle connecting with the ball below the server's waist.

The serve must be hit in the air. In other words, the server cannot bounce the ball before hitting it. If the serve knicks the net on the way over, the serve can be redone.

Again, you only score points when serving.

The paddle is similar to a ping-pong paddle. It's solid wood or other material like a fiberglass composite or graphite. Different players prefer different types of paddles. The wood is more traditional and a bit heavier than the others.

Your best bet is to choose one paddle to start with as you learn the pickleball ropes. Then, as you get more into the sport, you can try the others to see if you like them better.

The ball looks like a wiffle ball in that it's plastic and has holes on it, but the plastic is tougher to withstand the hits and bounces.

There are indoor and outdoor pickleball balls, and they come in a variety of colors to choose from.

Grab Some Gear and Get Started

What is pickleball, you asked? It's that amazing sport that's all the rage for people of all ages with tons of fun opportunities to play both for fun and competitively. And it's just waiting for you to jump on the court and give it go!

To start, find out where your local pickleball enthusiasts play. Then, put on your sneakers, grab a basic pickleball paddle, and go check out the scene.

Ask the players how to get in as a beginner then and there to give it a try and find out where you can take a beginner class. Then, go have some fun, learn a new sport and enjoy the community too!